Since I am nearing the anniversary of the publication of my first middle grade novel, The Legend of Ghost Dog Island, and will be celebrating the release of book two in the Swamp Legend series, The Curse at Pirate's Cove, between now and November 17, on Mondays, I will post excerpts from book one, beginning with chapter one, page one. Enjoy. 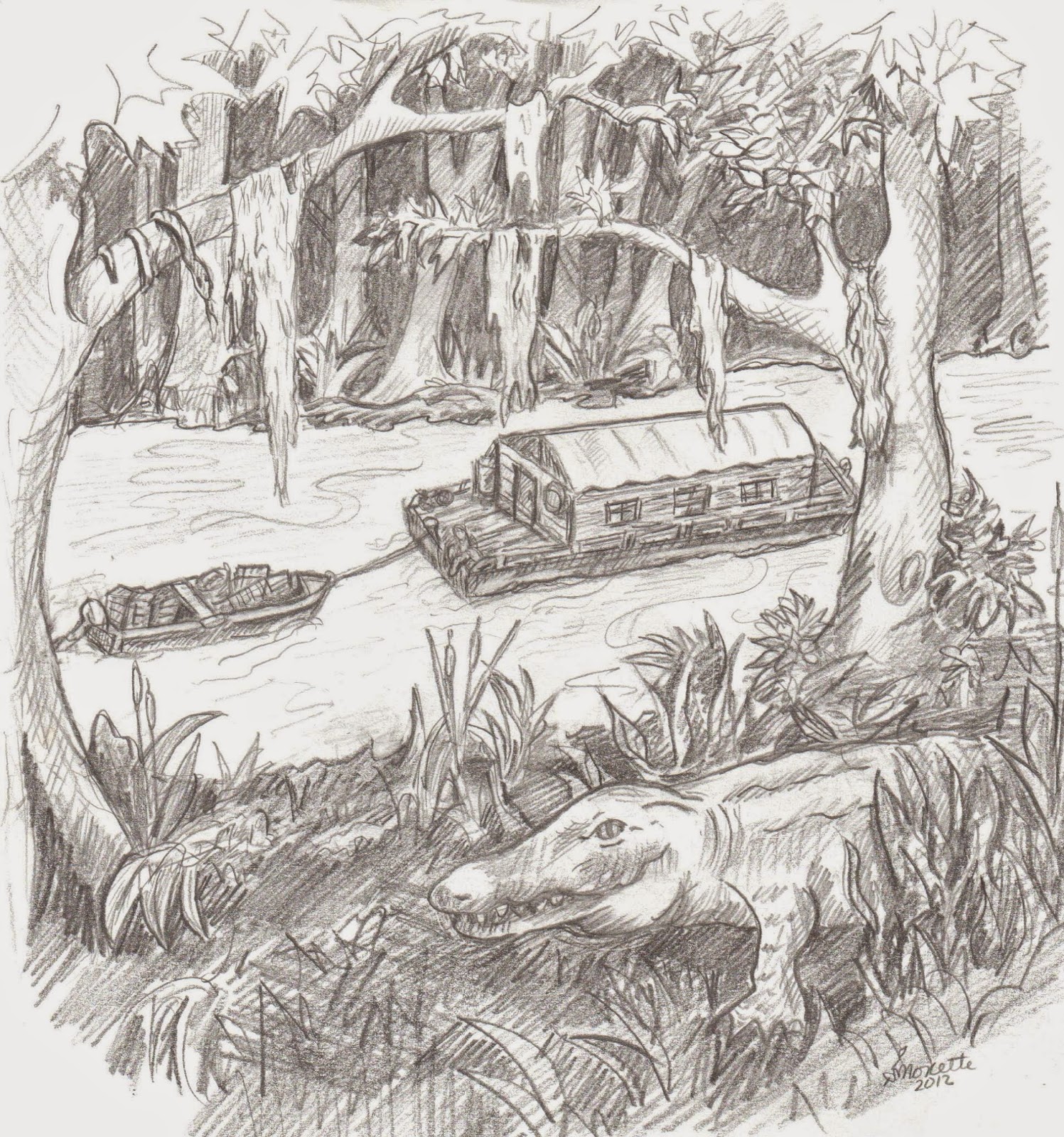 
“I’m going to hate Morgan City,” I complained to my dog Snooper, “no matter what Papa says.”


My beagle laid his head on my lap and gazed up at me with his watery eyes. He pretty much agreed with me on everything.


I sat on the deck of our old flat-bottomed houseboat as it glided through the winding bayous. Papa’s fishing boat, filled with baskets of line and crab crates, trailed behind on its rope. We were leaving Pierre Part, and Lydia, far behind. I rolled the legs of my overalls up and dangled my feet over the edge.


“Nicole Landry, keep your feet out of that filthy water,” Mama hollered from the doorway of the small living area of our floating home. She wiped her hands on her stained apron, then fixed the comb that held her long dark hair in a pile on top of her head. Mama was born and raised in New Orleans, but left the big city for a life in the bayous with Papa. She never looked back. At least that’s what she always told folks.


“They ain’t in the water, Mama.” I held my legs up so she could see they were dry.


She opened the patched screened door and shooed a fly out, before closing it and going back inside.


I twirled the end of my long black braid. Moving to a new place always gave me a lump in my throat as big as a bullfrog. But I wasn’t going to cry this time. I was ten years old after all.


I’d lived in that same house since the day I was born—as Mama always tells it, “the coldest morn’ of 1946.” But I couldn’t rightly recall how many times it got tied up to a new dock. Mama liked to say Papa never let the grass grow under his feet. But I could hardly think of a time when his rubber boots ever touched grass.


Papa grew up in Morgan City, and he said folks there were mighty friendly. But it seemed to me, most city dwellers weren’t too welcoming to my kind, being from the wrong side of the levee and all. And the city was where I’d have to go to school.


“And, as for making friends with any kids there, no way.” I shook my finger in Snoop’s face. “Just to up and leave ’em behind anyway.”


He managed a tiny whimper, as if I was fussing at him.


I thought about Lydia standing on the Belle River Bridge waving goodbye. My eyes burned, and I squeezed ’em shut. I felt in my pocket for her note. I’d read it at least a hundred times since she’d handed it to me, right before I went stomping down the ladder from her tree house. She’d scribbled down her post office box address and “write me,” then signed her name with the little heart over the i like she always did.


“Hmph!” I told Snooper. “She’s crazy if she thinks I’m going to write her after what she did.”


Lydia Hebert was my best friend in the whole world…until yesterday. It was a lot easier to leave while I was still mad at her. But now it felt like an empty hole inside me.

Come back next Monday for page two.

Of course, if you can't wait, you can purchase the book at one of the links in the side bar, or anywhere you normally buy your e-books.

Loved this book,Rita! Can't wait to read your second one! Cheers, big sis!