Today, I was going to write a post about Louisiana bayous, since it is the main theme for my blog and for my book, The Legend of Ghost Dog Island. I found instead this wonderful article in USA Today and decided to share it.


Located primarily in the southern reaches of Louisiana, the bayou is a defining feature of this unique part of America. The bayou is home to many people living in the Pelican State as well as to an abundance of wildlife. Unlike the rest of Louisiana, bayou life has its own pace and culture. The swamps and the gators might not be for everyone, but the people of the bayou feel right at home. This often-misunderstood area remains a mystery to many Americans.


The name "bayou" is even native to Louisiana. According to the Famous Wonders website, the term "bayou" is believed to have originated from "bayuk," a word meaning "small stream" in a local Native American tongue. The word was first used in Louisiana and has come to mean the braided streams that are fed by the Mississippi River in the low-lying areas of Southern Louisiana. These marshes or wetland areas move very slowly and make ideal homes for creatures like alligators, crawfish and catfish -- all of which are popular bayou foods.


The bayou culture is actually more diverse than many may think. There is no doubt that the most closely associated culture to the bayou is the Cajun culture. The Cajuns were French-speaking settlers relocated from Nova Scotia. They were actually known as "Acadians," but the local dialect eventually led to the word becoming "Cajun." In South Louisiana's bayous the culture is as diverse as the ingredients found in the local gumbo. In addition to the French Canadians that were the foundation of much of the bayou culture, there are also significant influences from Spanish, German, African and Irish settlers as well as Native Americans. In modern Cajun culture on the bayou, the people are a blend of all these cultures. In the Southern Louisiana bayous today, you can often find people who consider themselves "Cajuns" who primarily speak French, but have last names like Smith, McGee or Manuel as well as the French surnames common in the region.


The bayous are disappearing. Since the 1930s, the coast of Louisiana has lost 1,900 square miles of marshes and coastal wetlands. This is an area the size of Delaware that has been swallowed up by the Gulf of Mexico. Despite recent efforts to reduce the erosion of the bayou, Louisiana still loses about an acre of land every 33 minutes. That results in a loss of 25 square miles per year. Levees have funneled marsh-building sediment into the ocean; engineers have cut 8,000 miles of canals through the bayous to help the petroleum industry, all of which contribute to the faster erosion of the bayous.


Many people do not understand the importance of the bayou, not only as a natural habitat for many species of animals, but also as a protector of inland areas. Cities like New Orleans are under an increasing threat from hurricanes as a result of coastal erosion. When the bayous shrink, it means the storm surge from tropical storms and hurricanes can reach further inland. These storm surges can result in greater flooding. An example of this effect was apparent when the levees were overrun by Hurricane Katrina's storm surge in 2005.


Lee Morgan is a fiction writer and journalist. His writing has appeared for more than 15 years in many news publications including the "Tennesseean," the "Tampa Tribune," "West Hawaii Today," the "Honolulu Star Bulletin" and the "Dickson Herald," where he was sports editor. He holds a Bachelor of Science in mass communications from Middle Tennessee State University.

Posted by Rita Monette, Writer at 11:22 AM No comments:

What is a nutria anyway?

Also known as Coypu, the nutria (sometimes called nutria rat) is a rodent. They average ten pounds and look like a cross between a beaver and a rat. They have large rear webbed feet, which makes them good swimmers. They are native to Argentina, but found their way to the states in the 1930s.

They are cute, but I don't think they would make good pets because those large front teeth are three inches long and can penetrate your hand very quickly.

My dad, who was a trapper in the 1940s, said he was trapping for beaver when he caught one of these for the first time. They were rare in Louisiana back then, and their thick hides were worth a "pretty penny." By the 1960's they had become so plentiful in the state, the wetlands began to suffer under their ravenous appetite and wasteful eating habits, along with their high rate of breeding. 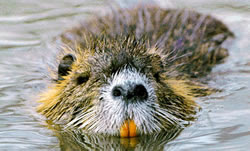 Nutria have large incisors that are yellow to orange-red on the outer surface.   (Photo from U.S. Geological Survey.)

How did they get so plentiful so fast?

Science Daily says: The biology of the nutria species allows it to reproduce at rapid speed, making it an unwieldy animal to control if released into the wild. A female nutria averages about five young per litter, but can birth as many as 13 at a time. A female can breed again within two days after giving birth, meaning one nutria can have up to three litters per year.

To get a sense of their productivity, 20 nutria brought to Louisiana in the 1930s bred an estimated 20 million animals within two decades, according to a wildlife group in Maryland that tracks nutria data, quoted in a recent report by Louisiana journalist Chris Kirkham.

Although nutria were brought to all parts of the country, said Kirkham's report , warm weather in Louisiana has boosted their numbers. Already under pressure from saltwater intrusion, the marshes also have to deal with the nutria and their voracious appetite for the vital marsh roots that keep wetlands intact.

Did Mr. McIlhenny of Tabasco fame bring them to Louisiana?

For many years, Tabasco sauce magnate E.A. McIlhenny received most of the blame for introducing the rodents from South America to Avery Island in the 1930s. McIlhenny wanted to expand the fur trade in Louisiana at that time, so he brought nutria from South America to his home on Avery Island, the story went. But a hurricane blew down the nutria pen, releasing them into the wild.
The myth held for decades, sometimes perpetuated by family members themselves. Five years ago, a historian hired by the family found records that McIlhenny actually bought the nutria from a St. Bernard Parish fur dealer in 1938. He did eventually set the nutria loose, but not because of hurricane damage, said McIlhenny historian and curator Shane Bernard, quoted in reporter Kirkham's recent newspaper interview.

"I'm confident that all the myth has been stripped away," he said. "Anybody who knows oral history or folklore knows how stories can change when they're passed down from one generation to the next."
(Science Daily) It is said that after Hurricane Audrey, in 1957, during which many young children were swept away into the marshlands, the cries of the nutria were mistaken for lost babies, crying "mom."

In my book, The Legend of Ghost Dog Island, set in Louisiana in the 1950s, there is mention of the eerie sounds these animals make. What are the Louisiana People doing to save the Marshes from this over-abundant critter?