The Water Moccasin, his Habitat, and a Recipe...

Today, I'd like to talk about the water moccasin.

The moccasin is mentioned in my book, The Legend of Ghost Dog Island. The main character, Nikki Landry, lives in the swampy bayous of Louisiana where these snakes like to live.

If you live in the deep south, you probably know to stay away from these critters that some people call cotton mouths or cotton mouth moccasins. 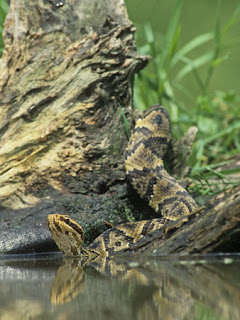 Which name is correct, water moccasin snake or cottonmouth? Let's see what the experts have to say.

Well, the name “water moccasin snake” is more or less a generic term used by rural
folks referring to any dark colored snake near the water. The name
“Cottonmouth” is the correct name accepted by herpetology. For the sake of
the rural folks.

Habitat: One thing common among
most venomous snakes is that they
don’t enjoy the presence of people.
With that, most venomous snakes tend
to seek out places that have the least
amount of human contact as possible.
Well, this snake is no
different, their optimal habitat consists
of marsh wet lands and other calm slow
moving streams, cypress swamps,
ponds and lakes. For the most part they stick to natural fixed bodies of water
with thick vegetation that provides an abundant source of food.

This range map, courtesy of USGS, shows the range of Cottonmouths. 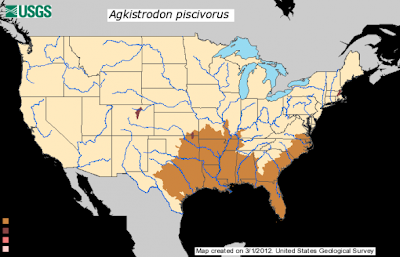 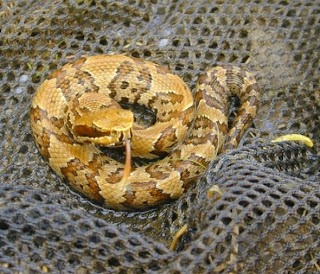 Now just for fun, here's a recipe for the...
Water Moccasin
Cheers!

The History of Morgan City, Louisiana

Today I'm featuring the city where I spent most of my childhood and teen years, which is also the setting for my middle grade novel, The Legend of Ghost Dog Island.

The Attakapas Indians called it Atchafalaya or "long river". Stretching over 135 miles, the Atchafalaya river has been the life line affecting the history and tradition of Morgan City. From its first Attakapas residents to the present day shrimping and oil trade, the river has provided prosperity and opportunity coupled with difficult challenges to many generations. As the tide ebbs and flows along the river, so does Morgan City. The city is a "gumbo" of French, Spanish, Italian, German, Dutch, Native and African American heritages blended into a strong belief in faith, tradition and family that define the strength of the city today.

Originally known as Tigre Island because of the spotting of an unknown cat there by a group of U.S. surveyors, the area attracted the attention of Kentucky planter and surgeon Walter Brashear. Brashear's subsequent subdividing of his sugar cane plantation was the beginning of the first permanent settlement known as the town of Brashear.

Because of Morgan City's strategic marine location, the town of Brashear played a prominent role in the war between the states. Brashear was occupied by Federal troops for over three years. It was in Morgan City that the Union troops planned the destruction of the Avery Island salt mines, the cutting off of Rebel supply lines from Texas, the capture of Texas to restore her to the Union, and the annihilation of all Confederate resistance in southwest Louisiana. The remains of Fort Starr, a Union fort, are still visible.

Following the war, Charles Morgan, a steamship and railroad entrepreneur, successfully dredged the Atchafalaya Bay Channel and made Brashear his base of operations. As a result, Brashear became a bustling trade center for animal fur, cypress timber, and seafood. In 1876, the town was renamed Morgan City in his honor.

The late 1800s and early 1900s was an era of growth and development. Many of the historic buildings such as Sacred Heart Catholic Church, Trinity Episcopal Church, and Pharr Chapel Methodist as well as distinctive homes including Cotton Top, the Norman-Schreier House, and the Turn-of-the-Century House were constructed. Boat building, moss picking, and a shell crushing plant broadened Morgan City's economic base.

Substituting the jungles of Africa with the swamps of Morgan City, Hollywood made its mark in 1917 with the filming of the first Tarzan movie starring Elmo Lincoln. This would be the first of several films highlighting Morgan City's diverse landscape.

In 1937, Morgan City became known as the "jumbo" shrimp capitol of the world. A community strongly rooted in Catholicism and tradition, a "blessing of the fleet" was held to insure a safe return and a bountiful harvest. Following the blessing, the celebration traveled to Egle's Place for a fais-do-do, a Cajun dance. This was the inception of the Louisiana Shrimp Festival, the state's oldest chartered harvest festival.

A decade later, Morgan City made national headlines when Kerr-McGee Industries drilled the first successful offshore oil well out of sight of land. According to The Times Picayune, it was the most significant discovery to date. The "black gold rush" marked a new era in the city's prosperity. Because of its considerable importance to the economy, "petroleum" was added to the Louisiana Shrimp Festival. The present day Louisiana Shrimp & Petroleum Festival is held every Labor Day weekend in the historic district.

Morgan City's Main Street Program designation was officially recognized in 1997, and combined with the nine-block historic district, it now encompasses a 19- block area.

Just as the Atchafalaya River continually flows, so does Morgan City. Its ebbs have defined its character and have made us a stronger people. A relentless spirit of the people and a strong belief in family, faith, and tradition make Morgan City the place we call home.

For more information, go to: http://www.cityofmc.com/index.php/aboutmorgan-city/morgan-city-history.html
Posted by Rita Monette, Writer at 10:12 AM 37 comments:

Did you know the Acadians have their very own flag? Well, they do, and the following article explains how it came to be and what the symbols on it represent...


Thomas J. Arceneaux designed the Louisiana Acadian Flag to commemorate the 200th anniversary of the Acadian exile into Louisiana and to remind us of other important influences on Acadians. Arceneaux, a native of Carencro, La., is a life-long supporter of English-French bilingual education in Louisiana Schools and was a charter member of the Council for the Development of French in Louisiana (CODOFIL). He is the former Dean of Agriculture (1941-1973) at the University of Southwestern Louisiana in Lafayette and was one of the early leaders of the Louisiana French renaissance movement that revived interest and pride in the French-Acadian heritage.


Description of the Acadian flag:


Three silver fleurs de lis on a blue field represent the French origin of the Acadians. The fleurs de lis is a symbol of the kings of France.


When the Acadians arrived in Louisiana, it was under Spanish rule. Since the Acadians prospered in Louisiana after years of exile, a portion of the flag pays homage to Spain with a gold tower on a red field representing the Old Arms of Castille, a prosperous European Spanish kingdom.


The gold star on a white field represents "Our Lady of the Assumption", Patroness of the Acadians. When the first settlers departed France for the New World, the Virgin Mary was highly revered. It was a period of great devotion to the Virgin. The King of France, Louis XIII, and Pope Pius XI declared the Virgin Mary the patroness of the kingdom, (Patronne de Royaume) and Patroness Saint of all the Acadians in Canada, Louisiana and elsewhere. On August 15, 1638, France and her colonies were consecrated to Mary under the title "Our Lady of the Assumption".


The star also symbolizes the active participation of the Acadians in the American Revolution as soldiers under Spanish Governor Galvez. Shortly after the arrival of the displaced Acadians in the Spanish territory of Louisiana, the American colonies started their struggle for independence. Spain decided to champion the cause of the 13 American colonies in their revolution against the same English nation that had so cruelly exiled the Acadians. The Acadians chose to serve under Galvez, the Governor of Spanish Louisiana, and they actively participated in the battles of Manchac, Baton Rouge, Mobile and Pensacola, which were all very important and decisive victories that contributed to the successful conclusion of the American Revolution.


http://lafayettetravel.com/essentials/culture/acadian-flag where you can learn more about Cajun country.
Posted by Rita Monette, Writer at 8:53 AM 6 comments: