It’s springtime! The time when folks begin to gather outdoors for barbeques and cookouts. But if you live in Louisiana, family and friends usually crowd together for crab and crawfish boils.


Growing up in Louisiana, there wasn’t a weekend that went by when at least one family member would invite us over for a boil! It was a time when cousins played on the lawn, and the women sat around and gossiped, while the men worked around the hot pots, purging the crawfish, seasoning the water (everyone had his own recipe as to what went in, and they weren’t about to tell the other).


For any northerners that don’t know what a crawfish is…well, here ya go. It as a small lobster, but much more tender and tasty. Oh yeah!
Crawfish Legend


And as with all things Louisiana, there is a legend that goes along with the crawfish that goes like this: 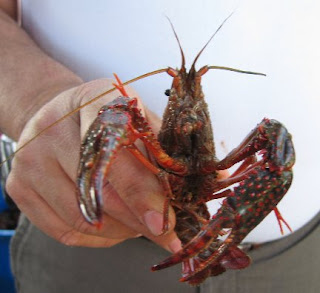 Crawfish are descendants of the Maine lobster.


After the Acadians (now called Cajuns) were exiled in the 1700s from Nova Scotia, the lobsters yearned for the Cajuns so much that they set off cross the country to find them.


This journey, over land and sea, was so long and treacherous that the lobsters began to shrink in size. By the time they found the Cajuns in Louisiana, they had shrunk so much that they hardly looked like lobsters anymore.


A great festival was held up their arrival, and this smaller lobster was renamed crawfish.

But you don’t have to live in Louisiana to partake of these wonderful crustaceans. These days, you can order a sack or two and have them sent directly to you live and kicking...er pinching. There are several companies that will ship them out overnight to you.


There are many steps to cooking delicious boiled crawfish. First of all, you will need the following ingredients:

1 (35 to 40 pound) sack live Louisiana Crawfish*
2 (1 pound) boxes/sacks Crawfish Boil Seasoning**
6 to 8 lemons, sliced in half
Small onions, peeled
Smoked sausage, cut up into large pieces
Small red or new potatoes, unpeeled
15 to 20 ears of fresh corn on the cob, shucked and broken in halves
6 heads of garlic, split in half exposing pods.

One large Stainless-Steel Boiling pot (60 to 80 gallon) with basket insert, and lid (you can use your Deep-Fat Turkey Fryer) - will cook about 10 to 15 pounds of crawfish per batch)


A large paddle for stirring the crawfish.


A large picnic table with plenty of newspapers to cover it, several rolls of paper towels, and a large garbage can.


In a large (60- to 80-gallon) pot over high heat, add enough water to fill a little more than halfway.


Cover pot, turn on the burner full blast, and bring water to a boil; boil 2 to 3 minutes to allow the spices to mix well. NOTE: It needs to be hot enough to bring the pot to a rolling boil in about 15 minutes.


Using a large wire basket that fits into the pot, add onions, sausage, mushrooms, potatoes, and any other vegetables you desire. Maintain a boil and cook 10 minutes or until potatoes are tender.


Add crawfish to the wire basket (note: remove any crawfish that are not live), stirring them a bit. Once the water starts a rolling boil again, boil 5 minutes. Regulate the burner so the rolling boil is maintained, but where the pot does not boil over.


Turn the burner off, keep the pot covered, and let the crawfish soak for 20 to 30 minutes. 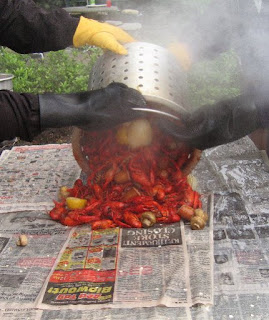 
To serve the traditional way, cover a table (preferably outdoors) with thick layers of newspaper.


Spill the contents of the basket (onions, potatoes, sausage, mushrooms, green beans, and crawfish) along the length of the newspaper-covered table. They are best served steaming hot. 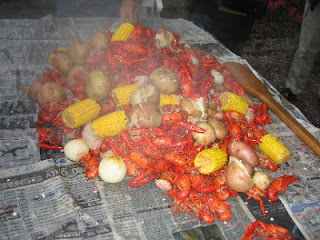 
To learn more about how to purge the crawfish and interesting things about them, check out http://whatscookingamerica.net/Seafood/CrawfishBoil.htm

Rita Monette is a South Louisiana native and the author of The Legend of Ghost Dog Island, a middle grade novel about a young girl growing up on the bayous of Louisiana. Oh yeah, she eats her share of crawfish!