What is a Cajun?

(Per definition from wikipedia)

﻿﻿﻿﻿﻿﻿﻿﻿﻿﻿﻿﻿﻿﻿﻿﻿﻿﻿﻿﻿﻿﻿Cajuns (pron.: /ˈkeɪdʒən/; French: les Cadiens or les Acadiens, [le kadjɛ̃, lez‿akadjɛ̃]) are an ethnic group mainly living in U.S. state of Louisiana, consisting of the descendants of Acadian exiles (French-speakers from Acadia in what are now the Canadian Maritimes). Today, the Cajuns make up a significant portion of south Louisiana's population, and have exerted an enormous impact on the state's culture.
﻿﻿﻿﻿﻿﻿
﻿﻿﻿﻿﻿﻿Cajuns were officially made an ethnic group in 1980.

﻿﻿﻿﻿﻿﻿﻿﻿﻿The Cajuns retain a unique dialect of the French language and numerous other cultural traits that distinguish them as an ethnic group. Cajuns were officially recognized by the U.S. government as a national ethnic group in 1980 per a discrimination lawsuit filed in federal district court. Presided over by Judge Edwin Hunter, the case, known as Roach v. Dresser Industries Valve and Instrument Division (494 F.Supp. 215, D.C. La., 1980), hinged on the issue of the Cajuns' ethnicity. Significantly, Judge Hunter held in his ruling that:

However, In 1961, the Council for the Development of French in Louisiana (CODOFIL) was founded, putting the French-language curricula in the public schools. In the rural southwestern Louisiana parishes, nearly one third still speak French on a daily basis.

I am sad to say I was part of the generation that was not taught to speak the melodic and mysterious native language of my father.

In my debut  novel, The Legend of Ghost Dog Island, set in the 1950s, Papa speaks the Cajun dialect, while teaching his daughter, Nikki, that French is "a dying language." 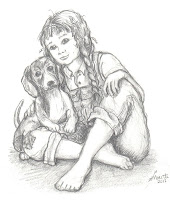 Join ten-year-old Nikki Landry as she vows to learn her father's languge, while she unravels the mystery of an age-old legend in the gator infested bayous of Cajun country.