The one place I remember living in my young life as a fisherman’s daughter was the bus on the levee in Morgan City, Louisiana, in the 1950’s. 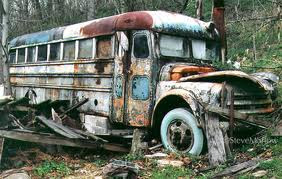 There were six of us living in an abandoned Greyhound bus. My parents, my step-brother, and my other two siblings. I will say it was cozy, but I don’t remember feeling crowded. Mama had a kerosene stove in the front next to where the bus driver seat was. It was fun opening the folding doors. We had mattresses piled at the back end of the bus that we laid out on the floor at night.

This was in the days before welfare as we know it. In today’s world of government control over family life, I can imagine that we would have been taken away from our parents to live in foster care with strangers. But, we had everything we needed in that little bus, included the love and care of our parents. We eventually moved into better housing, probably a houseboat or trailer, but we always stayed together. All of my siblings and I grew up to be hard working citizens, which is proof that living in poverty does not have to make you dependent on the government. Would being on government support have made us lazy and not motivated to do better? One can only speculate.
Posted by Rita Monette, Writer at 9:15 AM 4 comments: