Last night at the banquet of the Tennessee Mountain Writers' Annual Conference, I was presented with two awards.  The first place in the category of Writing for Young People for my novel, The Zone of Fear, and second place in the same category for my Nikki Landry and the Legend of Ghost Dog Island (an excerpt is in a previous post). Needless to say, I am still in shock.  Nikki would be jumping for joy!!! Now to get them published!
The conference was a wonderful three day event. I met some very talented writers, both published and pre-published, and made some new friends.  The speakers were awesome.  I got some valuable advice from Candie Moonshower in her presentation on plotting.  Sam Venable was a hilarious speaker at the banquet.  Overall, I was very impressed with TMW!
http://www.tmwi.org/
Posted by Rita Monette, Writer at 3:48 PM No comments:

Excerpt from my Middle Grade Children's Novel: The Legend of Ghost Dog Island 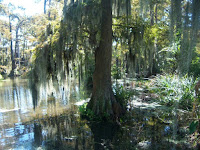 Spikes led the way through the thick swamp.

“Slow down Buzzard.” A string of moss reached down and brushed my cheek, as I hurried to keep up with him.

“We need to get there before those clouds cover the moon, and we won’t be able to find our way.” He patted his back pocket where he had stuffed his flashlight. “I don’t wanna use old Red unless I have to. Batteries aren’t cheap, ya know.” He turned around and glared at me. “And for the last time, don’t call me that.”

The loud croaking of the frogs and buzzing cicadas rang in my ears. A male alligator grunted in the distance.

A chill went through my body, while the mud pulled at my boots. “We are going to die here.” I looked behind me to see how far we had come from the water’s edge.

He plowed ahead. “I have to get the spell, and she is the only one that can give it to me.”

The moon created shadows from the willows and cypress trees that lined a path into the swamp where it was rumored the voodoo witch lived.

No grown-up in the area admitted to actually believing the legend--even though they liked telling it. But the kids living along Bayou Platte seemed to know differently, and Spikes had a reason to want to find out the truth. And, as scared as I was, I wanted to see for myself what was on Ghost Dog Island.
Posted by Rita Monette, Writer at 9:33 PM No comments: