Behind Every Legend Lies the Truth

Written and illustrated by Rita Monette 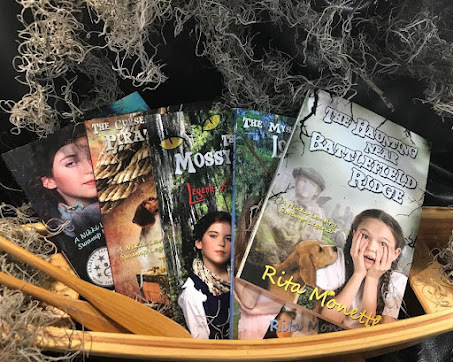 Set in the 1950s, and steeped in South Louisiana Cajun culture, Nikki Landry draws you into her world of gators, moss-covered cypress, and gumbo gurgling on a kerosene stove in her raggedy old houseboat.

But bayou country is also bathed in mysterious tales of swamp creatures and strange happenings that might make you wanna sleep with the light on.

papa says there's always truth behind a legend. And Nikki is determined to get to the bottom of the age-old beliefs that sometimes terrify the folks living in her small town.

Each episode finds Nikki, along with her quirky pals and her loyal but lazy beagle, Snooper, on a new and spooky trail to uncover the truth. And nothing is going to stop her.

The Curse at Pirates Cove

The Haunting near Battlefield Ridge