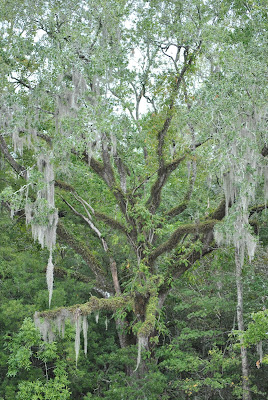 If you’ve ever visited southern Louisiana, Florida, Mississippi or Georgia, you have seen Spanish moss eerily flowing from the trees. But what exactly is it?

Spanish moss is neither Spanish nor moss. It belongs to the pineapple family (without the fruit) and is an epiphytic herb (whatever that is). Many people believe that the moss takes its nutrients from the tree, and go to great lengths to have it removed. But unless it is so dense that it blocks the tree from needed sunlight, you don’t have to worry about it harming the tree. The moss just uses the tree as a prop. It can happily grow on fences power lines, or anywhere it can sway in the breeze and catch the moisture in the air.

This moss has had many uses in the past, as well as the present. When processed and dried, it turns from its soft gray appearance and texture to a black, curly, tough fiber, similar to horse hair. The Native Americans and early settlers used it, among other things, to stuff mattresses or weave it into floor mats, horse blankets, and rope. They used it in house building. The rope was used to tie the framework together, and when mixed with clay, was used as a plaster. No doubt many plantations have it hidden in their walls. My mother told me that my very first crib contained a moss mattress.

I’ve found contradicting information that moss either contains insects...so beware, or that it was used in bedding because it naturally repels insects. This requires further Googling.

And with everything Louisiana, there has to be a legend attached, right? So here is only one of a few. I’ve seen this poem posted many places, although I’m not sure who to credit it to. 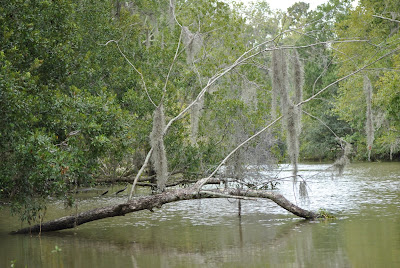 There’s an old, old legend, that’s whispered with Southern folks
About the lacey Spanish Moss that garlands the great oaks.
A lovely princess and her love, upon their wedding day
Were struck down by a savage foe, amidst a bitter fray;
United in death they were buried, so the legend go
‘Neath an oak’s strong, friendly arms, protected from their foe
There, as was the custom, they cut the bride’s long hair with love
And hung its shining blackness on the spreading oak above;
Untouched, undisturbed it hung there, for all the world to see,
And with the years the locks turned grey and spread from tree to tree. 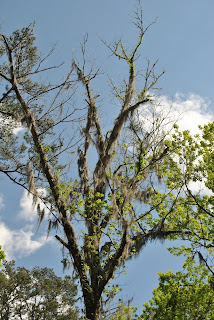 And what would any novel based in Louisiana be without the mention of Spanish moss. So, here’s a quote from my novel, The Legend of Ghost Dog Island.


“As the propeller stirred up smells of rotted seaweed and dead fish, I stared out into the swamp. A cypress tree all draped in silver moss stared back at me like a crooked old woman dipping her hair into the muddy bayou. Its twisted limbs reached out to me. I shuddered.”
Whatever the stories, or whether it’s Spanish or not, I think its beauty is a sight to behold.

Rita, this is wonderful. I love your Louisiana Tidbits!

Thanks for stopping by, Sloane, and for commenting. Cheers.

I loved, loved, loved this post. I never would have known about Spanish moss had I not read it.
There's some Spanish moss in the woods where I ride my horse (in California) and I love it and now feel as if I can talk about what it is since I didn't know before. I think it's beautiful and kind of creepy at the same time. Thanks for telling us about it.
Patti

There is a kind of creepy feeling I get when looking at pics of Spanish moss. It looks so haunting, like it's sucking the life from the tree. Thanks for sharing more Louisiana lore, Rita. And I loved how you tied in your novel! Cheers! Still say you should create an ebook with all your Cajun posts!

Thanks for your comments Patricia. Glad I could enlighten you. I loved your blog. Will go back and visit often.

Sharon, the reason some people thought it sucked the life out the tree is because a lot of it gathers on already dead trees. I thought the same thing until I read more about it. And it does look kind of ghostly. That's why it conjures up those legends. Hehe. And actually, I'm learning a lot about my home state by researching and writing these blogs.

Hey, got some Spanish moss draping itself over our only tree of any note. Creepy at night when it's half-dark and it sways a little. We first got the idea when we traveled through Texas on a Greyhound bus. Saw those strands waving in the wind. Between Michener's Texas and Larry McMurtry's Lonesome Dove, we realized what it was as soon as we spied it out the bus window. We yelled "Spanish moss" together and all the other people dozing on the bus woke up and glared at us.