The Takeaway Boat
from Stories of Bayou Life


My cousin and I—couple of third graders—sat on the pier looking out at the bayou, which was actually an industrial canal. It had been dredged out to bring barges and tugs to the Atchafalaya River, and into the gulf if need be. We called those barge-pushing tugs, takeaway boats.  The reason was simple. When the boat came close by, the water along the edge of the bayou would rush toward it, taking away any debris, including boats that were not tied up. We never knew where the water went while the boat was passing, but eventually, it turned it loose, sloshing it back toward the bank, along with anything floating in it. 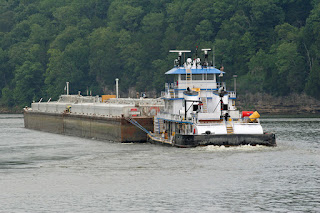 We saw the huge barges first—coming around the turn. There were two of them, followed by the tug. We heard the loud honk of the boat's horn. Now was the time.

My cousin and I climbed into the boat and started paddling toward the path of the barge. We got about half way to the middle of the canal, then stopped...and waited. As the barges got close, we could feel the boat starting to shift. We looked at each other with terror in our eyes. What were we thinking? The tug boat captain pulled down on his horn with a loud, long honk.


We began to paddle toward shore, but the water pulled us toward the path of the boat. We paddled harder. It was no use, the current was too strong. We began to scream as the horn sounded again, this time longer.  As our tiny boat became sucked into the current of the barges that grew larger as it got closer, we jumped into the water and began to swim toward shore. It was a strain on our small arms, but we made it to the dock. Only then did we look back to see the boat being scraped alongside the long and heavy barges. The man in the tug shook his fist at us.

When the monstrous boat made its way past our dock, the water sloshed back to shore, returning our pirogue in one piece.

We made a pact not to tell anyone about that incident, and we vowed never to try to test the powers of the takeaway boat again.
Posted by Rita Monette, Writer at 12:57 PM

Email ThisBlogThis!Share to TwitterShare to FacebookShare to Pinterest
Labels: life on the bayou, tug boat

So glad you both lived to keep the secret ;)

Thanks Marga. I'm sure we all have those "close call" stories from our childhoods. The ones we didn't tell our parents about. hehe.

Oops, sorry about the typo in your name, Marva.