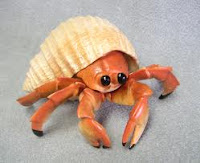 
Some people buy these crabs for pets, and keep them in an aquarium. But before you do this, be sure and get familiar with the care and feeding of them.
Posted by Rita Monette, Writer at 9:21 AM

What a lovely story!! It did made me laugh when you and your brother played with them but at the ending I felt quite sad...truly creatures such sa these are magnificently created by God! It's quite amazing how a Great and Loving creator created such cute creatures. This evening me and my lil Sister were out at sea looking for shells and other pretty stuff I wanted to actually see a hermit crab and I noticed a pretty shell which looks exactly like the picture on top but to my notice no crab and it was quite difficult to find one..a truly wonderful story...God bless!

I saw a post on fb about all hermits coming from Asia and I thought, "I thought I saw these in lousiana so I'm going to google to be sure. Not only does your story verify but it was actually the cameron/holly beach where I lived. Small world.