James Lee Burke: One of my favorita authors

Today, I'd like to feature one of my favorite authors, James Lee Burke. A two-time Edgar Award winner!  I literally have his entire collection of The Dave Robicheaux series. This series is set in New Iberia, Louisiana.

I first found James Lee while browsing a local grocery store in Michigan, for a book to read on my work break. The name of the book was "Purple Cane Road." I read the excerpt and, as a Louisiana girl, raised in purple cane territory, I simply had to read it. I've been hooked ever since.

James Lee Burke can describe the Louisiana scenery and culture like no other. If you like crime novels mixed with some Cajun essence, you should read the Robicheaux series. He also has a series about a Texas ranger set in east Texas.

Then there are his scenes in Missoula, Montana. I've never been there, but James Lee's descriptions will make you feel you are there. Another must-read is "In the Electric Mist with Confederate Dead." Haunting! 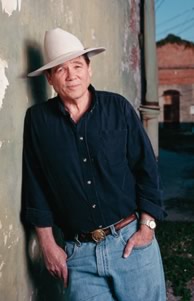 Here's his biography taken from his web site. Go there http://jamesleeburke.com for a complete list of his works and other information. Read on!!!

Lee Burke was born in Houston, Texas, in 1936 and grew up on the Texas-Louisiana gulf coast. He attended Southwestern Louisiana Institute and later received a B. A. Degree in English and an M. A. from the University of Missouri in 1958 and 1960 respectively. Over the years he worked as a landman for Sinclair Oil Company, pipeliner, land surveyor, newspaper reporter, college English professor, social worker on Skid Row in Los Angeles, clerk for the Louisiana Employment Service, and instructor in the U. S. Job Corps.

He and his wife Pearl met in graduate school and have been married 48 years, they have four children: Jim Jr., an assistant U.S. Attorney; Andree, a school psychologist; Pamala, a T. V. ad producer; and Alafair, a law professor and novelist who has 4 novels out with Henry Holt publishing.

Burke's work has been awarded an Edgar twice for Best Crime Novel of the Year. He has also been a recipient of a Breadloaf and Guggenheim Fellowship and an NEA grant. Two of his novels, Heaven's Prisoners and Two For Texas, have been made into motion pictures. His short stories have been published in The Atlantic Monthly, New Stories from the South, Best American Short Stories, Antioch Review, Southern Review, and The Kenyon Review. His novel The Lost Get-Back Boogie was rejected 111 times over a period of nine years, and upon publication by Louisiana State University press was nominated for a Pulitzer Prize.

Today he and his wife live in Missoula, Montana, and New Iberia, Louisiana.

Burke's Published Books are as follows:

Posted by Rita Monette, Writer at 10:05 AM No comments: Links to this post